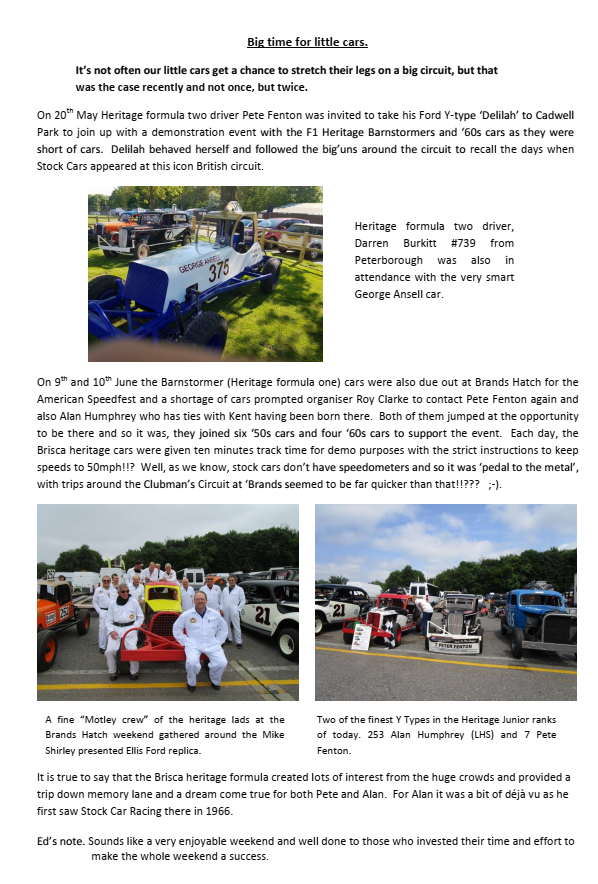 Report not yet received.

Report not yet received:

12 cars made it to this superb track on a blistering hot day, with 3 no shows. Nice to see Andy Webb 247out again, although he’s still receiving treatment, other first timers this year were 42 Pul Whiteman, 205 Paul Rookyard and 869 Mike Walmsley.

Paul Whiteman led the first heat but was soon passed by 537 Charles Barnes in the ex Howard Cardew. Phil Hiles 218 retired with broken suspension, followed by 205 Paul Rookyard but storming through the field was the afore mentioned Andy Webb 247, who took the chequered as 537 spun on the back straight.

Heat 2 started with no Paul Rookyard who had severe engine problems, and Phil Hickerton 559 was leading, his car now performing as it should, now that had cured his running problem (fuel). It was Phil Smith 762who was on a flier, taking the flag from the back of the grid, with Alan Nicholson 198 slowing toward the end of the race.

The final, was at a meeting to celeberate the 40th year since the late great, Chick Woodroffe opened the track at Arena, and it was possible that Andy Webb 247, could take it as he raced against in the 1960s, but unfortunately it wasn’t to be as once again 762 Phil Smith had outfoxed him, and took the final win. Charles Barnes 537 had led for many laps, until he spun and right on the last bend 869 Mike Walmsley and 773 Nick Whitney clashed while fighting for 3rd place, but both finished in the fence with quite some damage to repair.

Hopefully we are able to return next year with more cars, at this friendly track we had regular enquiries about our sport from interested spectators.

A good turnout of 21 cars, pitted for this bank holiday double header, with 314 Paul Bromham a no show. Appearing for the first time was 187 John Taylor, who has race F2 and Saloons and 739 Darren Burkitt with a very smart, well-engineered Ford Prefect that went well all weekend.

In race 1 John Taylor 187 and Ian Johnson 347 started from the back, Wayne Pritchard 22 led away, soon to be overtaken by 739 Darren Burkitt and then 533 Andy Kaye as 342 Ross Taylor spun. But as usual, the Banbury boys of 247 Andy Webb and 762 Phil Smith were soon in the lead as team mates 22 Wayne Pritchard and 23 John Clements retired, but at the flag it was 311 Granville Wright who dominated.

Race 2, and no 533 Andy Kaye (oil pressure) and John Clemnts 23 (misfire). 20 Dan Jeffrey led them off then 739 Darren Burkitt and 22 Wayne Pritchard, before once again 311 Granville Wright took over the lead as 773 Nick Whitney’s car died.

Thanks must go to Paul Nicholson, who did a sterling job on track, getting the grid lined up properly!

The race wasn’t very old, when 886 Brian Owen and 537 Charlie Barnes tangled on the seaside bend and 807 Ian Hoosan took 20 Dan Jeffrey hard in to the fence, whilst trying to avoid the tangled cars leading to the yellows. On the restart it was 22 Wayne Pritchard leading followed by 739 Darren Burkitt, 247 Andy Webb and 773 Nick Whitney, who soon retired with 533 Andy Kaye, then on the last lap 42 Paul Whitman got a tank slapper on and rolled, badly damaging the roof with the tyres; Phil Smith the first winner of The East Coast Cup.

In race 1, Darren Burkitt 739 took the lead as Charlie Barnes 537 half spun, but recovered, as Andy Webb 247 took the win. During his victory lap Richard Keleta encouraging cheering, whoever cheered the loudest would win Andy’s trophy, and didn’t it work- ive never heard such a reaction- really fantastic!

The Final only produced 10 cars, 739 Darren in his new car had cooling problems. 22 Wayne Pritchard led as 773 Nick Whitney retired, followed by 187 John Taylor, it was 47 Giles Carter the man who took the flag.

Richard Keleta than got Nick Whitney to present the trophies in a wedding dress he had worn all afternoon, over his overalls and on the victory lap, didn’t the crowd love it!

Big Thanks go to  Rob and Asha Speak, and all at Skegness Raceway, for making it such a fantastic weekend as always. Anyone who didn’t come, missed out!

“A sterling performance from Phil Hickerton”.

Last night (4th July) @ Arlington Stadium, Eastbourne, hosted the annual Pete Welland memorial.  Although a “mid-week” affair, in the south eastern corner of the country, there was a good driver attendance.

Phil drove a great race, with a last lap lunge on 773 Nick Whitney, Phil secured the chequered’s and not only the prestigious Pete Welland trophy, but also his first final win in the Brisca heritage “Junior” ranks.

Nik Eastwood on behalf of the Buxton promotional team would like to thank all the drivers and teams that made the trip to the Buxton raceway yesterday. He commented,  it was a really entertaining day and the formula were excellent.

Northampton International Shaleway hosted it’s first Saturday night floodlit meeting on the 13th of October and the Brisca heritage British championship. Congratulations to all the drivers and families that traveled to the venue, to make it such an enjoyable evening.

Back in 2004 the Brisca heritage formula first took to the tracks with the likes of Nick Whitney 773 , Darren Clarke 616 and Graham Bunter 728 demonstrating to the spectator a “look into a by gonge era”. Early Gold Cup winners include Darren Clarke 616 @ Mildenhall in 2006 and Andy Bateman 763 @ Arena Essex in 2007, which interestingly enough, fielded a grand total of 28 cars.

Since then the formula has continued to promote itself successfully around the various ovals of the country, which include Scotland, Ireland and the Isle of Man.  This weekend @ the Mendips, it represents  a real “milestone” for the formula as the 2018 Gold Cup will host a grid just shy of 40 cars, this in itself will provide a real view port into history, (when the “Formula Juniors” back in the day were a very popular attraction).

All we need now is a few white n red barrels to complete the vision……..

As the rain or some may say mizzle drifted through the Mendips hills to add a extra dimension to the 2018 Gold Cup. It is true to say the already tricky Mendip oval became quite challenging.  That said 36 cars grided to record the largest formed grid in the history of Brisca heritage f2 (Junior) stock cars. So congratulations to all those that traveled from around the country to make such a great meeting. 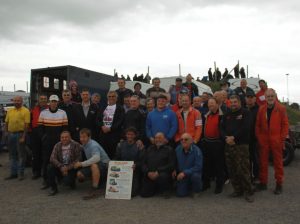 2018 “North Vs South Team championship”. (05/11/2018) Last night (Sunday) @ Belle Vue Manchester hosted the season finale of the 2018 North Vs South and the end of another fantastic year for the Heritage “Junior” stock cars. With perfect track preparation and weather conditions the scene was set for a great night. With 11 drivers representing the North and only 10 from the South the competition was close through out the evening and going into the meeting final only 5 points separated the two teams. The driver on the night has to be Manchester’s  Pete Fenton 7, who drove “ye ol” Y Type superbly and really brought home the victory for the North. The eventually tally being 92 to the  North and 73 to the South.

The prestigious team trophy in the hands of Manchester’s Pete Fenton 7, who really was the “Master” of the evening. 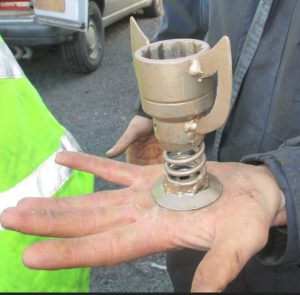 Congratulations to all the teams that travelled across the country to make such a great night, that interesting enough closed with a immense Startrax firework display.