Originally built by Roy Clarke this car has changed hands a few times before l bought it from Darren Burkett last year. Has served me well, but it’s time it moved on as l have two Y-type Fords for next season. Darren rebuilt it to his usual high standard and everything is nicely prepared. Running a stock 100E engine on SUs mated to an Aquaplane inlet manifold it runs remarkably well. Great starter car which will come with a set of tarmac-suitable wheels/tyres as well as the dirt set-up it’s on. Ideally collection from Truro but could be flexible for a meet at Gordano Services, Bristol. Looking for £2,250 but open to offers.

It is pleasing to announce that the 2020 formula calendars are now available.

As the print run is of 100 units, it is proposed that all current (2019) licenced drivers, will be allocated one calendar (FOC), with this in mind additional calendars are available for purchase.

The cost per calendar, (inc P&P) is £10, if you would like to purchase a formula 2020 calendar please contact (for a swift service before Christmas), Alan Humphrey @

If you are interested in supporting and promoting the Heritage formula and participating in the MWA exhibition in, Peterborough on 1st & 2nd of February 2020, please registrar your interest with the following, listed below.  To aid the organisers, confirmation is required by the end of December.

Andy Kaye the skillful “shaleman” from Driffield, secured top honours at the 2019 Gold Cup held at Belle Vue Manchester on the 3rd of November.

The track could be said to be “heavy & sticky” and some may say a drivers track, that is definitely true for Andy Kaye.  An experienced driver who kept his head and really mastered  the Belle Vue oval on Sunday night. A real credit to him and quite nicely rounds of a great year for Andy in the heritage formula, who incidentally is the 2019 World of Shale champion also. Top three finishers are:

On Saturday evening the “Potters” Stoke shale way had a certain magnificent charm about it and it can be said the track condition was, well perfect! The image below captured by Jacko, illustrates a fantastic “drivers oval”.

Congratulations to the South as the “in famous trophy” travelled down the M6 to remain in the “Southern shires” for the next 12 months.

It was a great turn out of cars and the formula  definitely promoted itself very  well. Proper. 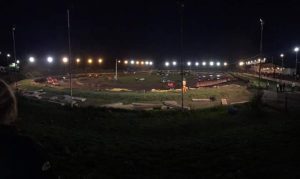 The annual end of season North Vs South team cup is a great meeting to have as this years fixtures draw to a close.

It has to be now the seventh or eight year in succession for the heritage formula, as this style of meeting was common place around the ovals of the UK since the 70’s and generated some great competition. It is with this in mind the formula carries on this tradition to generate an enjoyable evening at the Chesterton shaleway.

The origins of stock car team racing as remembered through the then young lads’ eyes of Phil Hiles.

As a child brought up on F1 & F2 stock cars in the early seventies, my very first memories are of being in the pits, listening to the good bit of banter between some of the drivers , and of course the rivalry.  Being from Bradford, only a stone’s throw away from the Odsal stadium, my father would race as often as possible and even travelling a bit north and south.

At the beginning of the seventies promoters like Mike Parker, hosting numerous tracks like Nelson , Blackburn ,White city , Rochdale, Doncaster and last but not least Stoke, many of those meetings attracted considerable sponsorship, by many a varied high profiling company, this included, British airways to Player No10 cigarettes.

Aligned with this, trophies were up for grabs, for example  the Northern rose bowl championship & Southern bowl championship provided tremendous racing and competition , for which there was a definite amount of “one up man ship” if a southern driver would take the North bowl away with them after a nights racing, and visa versa.

In addition to this there were also Midlands’s cups even Yorkshire & Lancashire bowls emerged.  Drivers with the likes of Al Barker, Frankie Wainman (smiler), John Hillman, Willie Harrison would defend their county from the likes of Doug Cronshaw, Stuart Smith, Graham Blundell and Len Wolfenden.   Additionally all the great “southern based” drivers add to the blend of great racing of that era  with the likes of Dave Chisholm, Brian Powells, Ray Leigh, Hoss  Fernihough, Sugar Shergold and Allan England  all contesting for these Northern and Southern bowls .

It is with this kind of stock car heritage that    the Brisca heritage F2’s (Juniors) are staging in the resurrection of this style of sportsman ship racing at this meeting at Stoke, “tut North versus the South”.  Although there is no major sponsorship organised or major rose bowl up for grabs, racing is for fun, it will still be competitive and very much wheel to wheel as so typical to the Chesterton shale way, an excellent racing experience for both the driver and spectator alike.

An article put together by Cornwall live media, which features, Alan Humphrey, Paul Ferguson and Alan Nicholson makes for an interesting read, that’s for sure whilst generating some fantastic publicity for our formula.

Ed’s note: A real credit to the gentlemen concerned.

Double click on the link below and the article will automatically open.